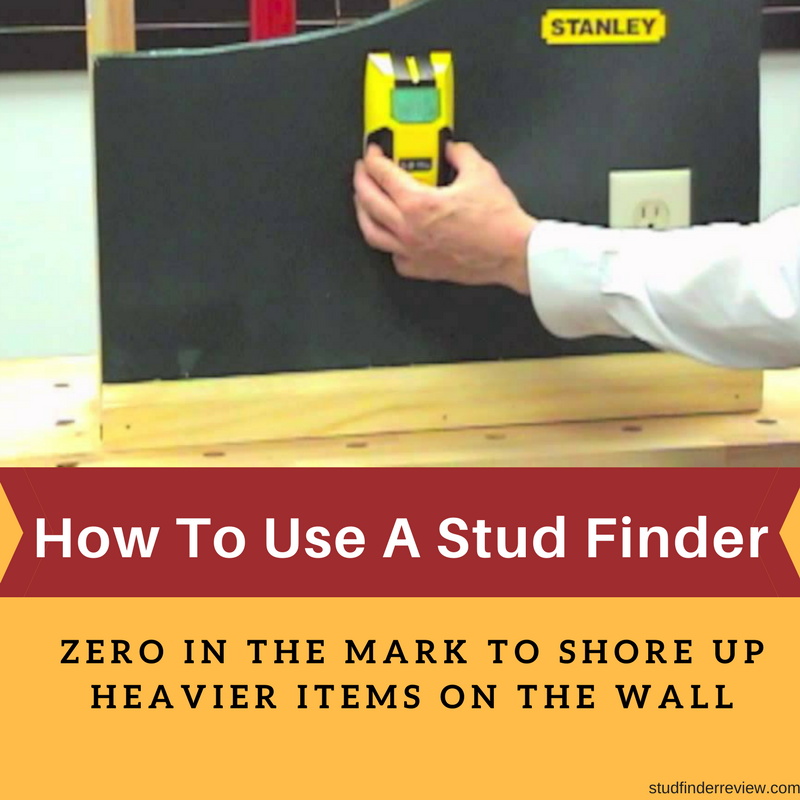 For contractors and do-it-yourselfers, existing studs help prop up new installation such as shelves, mount pictures or heavy objects on your wall sturdily. To hit the nail on the head, adhere to the manufacturer instructions, marking edges and centers of any stud reading using a pencil.

But stud finders also home in onto pipes, wiring or conduit making it an ace in the hole for home renovation, hanging items or punching through the wall.

The device will go through the wall with a fine-tooth comb supported by audiovisual alerts and repeated probing to range in studs with pinpoint-accuracy. To fathom inaccurate readings; you may want to use a nail to thread through and confirm the presence of studs underneath.

8 Things To Consider | How To Use A Stud Finder:

Check batteries, use only fresh and functioning ones as dead ones distort readings significantly.

Keep the wall all-spruced up, clear out any obstruction as they interfere with readings.

Cross-check the flat side of the device where you’ll access contacts and shield the wall against scratches.

Studs typically lie 16’’ to 24’’ apart; you will narrow down in the region within a dual-foot span.

Tool up the stud finder with a tape measure and pencil.

As you screen across the length of a wall, a pattern of readings emerge with studs scattered 16’’ apart. Readings with a different width and irregular location indicate you should not drive screws and nails.

2. Probing Walls with a Stud Finder

Hold the stud finder entirely against the wall with the top and base staying in contact with the surface. Place it roughly 1 foot left of the site of drilling or mounting.

Switch it on and calibrate in line with the manual until beeping stops.

Slowly slide the device from left to right, horizontally with the body flat on the lining.

When the tool produces audio or visual alerts, retrace a few inches in close range and double-check the site of beep or flashing light.

As you dislocate the stud finder, it will beep on the edge of the stud. Mark all sides to determine the dead center of the stud.

Stud finders produce signals when it detects the edge of open space beneath the wall and the end of a dense object.

Mark the point with a pencil or painter’s tape.

Recalibrate the stud finder or move it proximately from the opposite direction.

Locate and highlight the opposite edge. It lies approximately 1-1/2’’ from the first marking.

Measure and identify the midpoint which sandwiches the edges-the center of the stud.

Pinpoint various points on the target stud and range in adjacent studs to ascertain the presence of targets.

Remove the batteries when storing the tool for long to prevent damage when they deteriorate.

Ascertain the stud finder works on the type of wall you want to scan as most will only work on dry interior ones.

Do not nail, drill and cut into the wall with electrical wiring and shrouded water pipes as it’s dangerous. In case of electrical wiring buried beneath the wall, switch the circuit off before punching through the structure.

It’s possible for a stud finder to sense wiring and water pipes, but most models will detect wooden studs on drywall with a maximum depth in inches.

7. Directions & Clues Given By Stud Finders

8. Why Use Stud Finders Rather Than Old-Age Tricks?

Now that you have mastered how to use a stud finder, you can peg down targets without missing the mark. Handle the precision instrument with extra care, avoiding shock, extreme heat, and vibrations. Check batteries regularly to deter deterioration and keep the unit dry and shipshape.

You should also stick to the manual script; never second-guess your manufacturer and tool up with essential accessories like a pencil, lever, and tape measure. For connoisseur DIYers, you can wing it with a magnet or experiment one of the old tricks to locate targets.