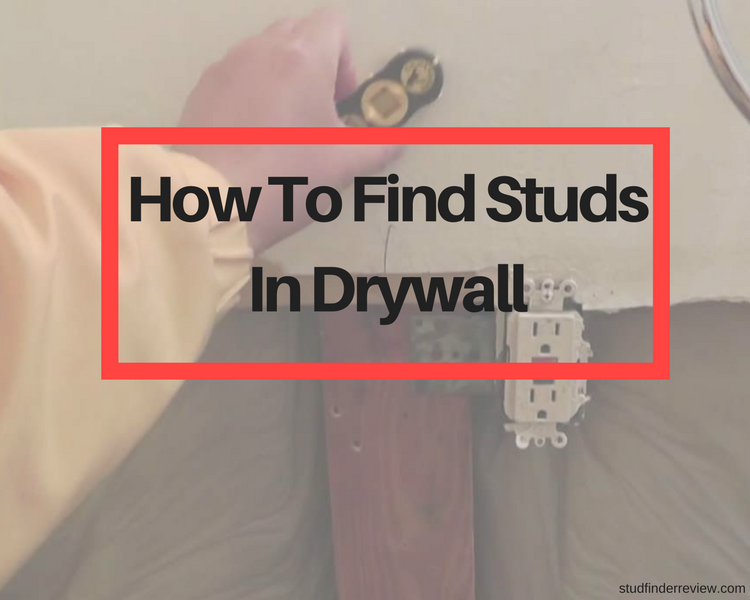 Drywall or lath for plaster walls hinge on studs or boards for framing support. Studs have a 16’’ to 24’’ spacing measured from midpoint to midpoint along a wall and stretch between the floor and ceiling. Hanging a cabinet, shelf and portraits with fasteners nailed directly into wall studs keeps them sturdily attached.

Drywall edges fasten over studs which create shadows of a tape joint, nail or screws. Use a glowing beam of light to illuminate the surface at a flat angle, outline of drywall joints and fasteners nestled at a stud. You can also resort to the old bag of handyman tricks like tapping with a hammer to hone in the edge of a stud.

Things To Consider About How To Find Studs In Drywall:

1. Detect One & Use A Tape Measure

If you pinpoint a stud, measure to the edge in 16’’ increments to home in the edge and center of neighboring studs.

The measurement of 16’’ from the midpoint and spacing will vary due to windows and doors. Carpenter tape measures come with 16’’ increments marked in red for more convenience.

The technique gets you to the estimated region hosting the adjacent stud; you need pinpoint-precision before whacking nails or drilling.

Use a small finishing nail drilled just above the baseboard molding via the drywall into the stud. Where the nail eats into the wood, you have verified the stud’s location.

Windows and door spaces will always possess studs along the edges. Most have dual doubled-up studs known as sister or king stud to make the spaces ultra-sturdy.

You can always locate a stud above or below windows or doors.

Probe electrical switches and outlets as they mount on the edge of studs. Once you pull out the cover, you will see the side of the unit where the stud lies for supporting screws.

Measure a minimum of ¾’’ away from the unit to pin down the midpoint of the stud. You can resort to the knock and pin test to find out the stud’s breadth. Studs lie at 16’’ intervals on any side of the outlet or switch.

5. Affordable Magnetic Stud Finders Will Do the Job

7. Why Find Studs in Drywall for Renovation?

Most homes feature a 16” on-center stud, which means an adjacent one lies at the next 16” increment.

However, some external basement walls design includes 2×2’s as they can securely shore up the drywall

To use a stud finder, use a tape measure to highlight a minimum of three studs in an array, and then compute the distances between the targets. If the studs have equidistant measurements, it gives you an acid test

Our in-depth how to find studs in drywall guide will feed into your quest for information on safe and secure anchorage points. You won’t bark the wrong tree or search for the needle in the haystack armed with these detective cues and tricks.

If you own a stud finder, it’s a breeze to nail down fasteners for mounting heavy and permanent structures like TVs, wall shelves and cabinets. Advanced electronic stud finders can pinpoint other objects like water pipes, live AC electrical wiring, rebar and other targets.